jack of all trades

Meet Jack.  He came to live with us when he was 8 weeks old – last February.

Let me first say that neither The Geek nor I had ever had a dog.  We come from strictly cat people. Yet we got it into our heads that we should get a dog, and it never occurred to us to get an older dog.  We wanted the whole deal.  After months of research into breeders, we chose one and went to meet them.  That plan that went awry when we discovered that all was not as it should be with their breeding.  So back to the interweb, where a chance forum encounter led us to a very well-respected breeder right here in Seattle, one who hadn’t bred in two years but just happened to have a litter in the works.  She bumped us onto the waiting list, since we were local – her dogs are sought after across the country.

Dang, he was cute.  His official name is Winroc Whiskey-a-go-go, but we call him Jack. Or “damn dog”.  Or “let go my shoe!” Or “that’s MY toast!”.  He likes people.  A lot. But not as much as he likes a) food or b) other dogs.  The only things he won’t eat so far are mushrooms, slugs, and salsa.  Must be a texture thing.  And he was pretty bitter to discover the plastic tub he’d hijacked was full of salsa.  Doesn’t mind horking down the occasional junk mail and will also destroy any plushy toy in no time flat.  When people come over, he goes a little nuts, but is getting much better.  He seems to know which people are anti-dog, and goes straight for them. 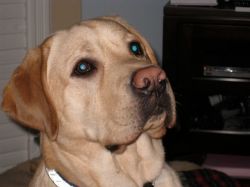 He’s still pretty cute.  And doesn’t eat his poop nearly as much!  We’re working on the whole “come” thing, which he is great at but it all goes out the window when another dog is nearby.  He sits and lays down like a pro, and will shake now too.  All of course, for a treat.  He feels a little robbed when he does all that for just a “good boy”.

Jack is our friend, and he’d like to be your friend too.  Especially if you share some of that bacon in your pocket.

2 responses to “jack of all trades”