The littles in our house, being 13 and 11, have been questioning lately. Not the boy/girl kind of questioning, but the Santa-Kind-of-Questioning.

Especially the 11 year old. I’d say most of his friends have firmly crossed over, but he is hedging his bets. He has asked several times “Is Santa real?’.  “Of course he is”, I say. “Who else brings the Santa presents and fills the stockings?!”  The Girl Child has been threatened with pain of death if she spoils the dream, but I think even she isn’t QUITE sure.

So on Christmas Eve morning, we trekked downtown to see Santa, the REAL Santa, at Macy’s.  We now have photographic evidence that he is real. That night, cookies and milk were left, with a note reminding Santa about Jack’s unmarked stocking.

Santa did not forget. 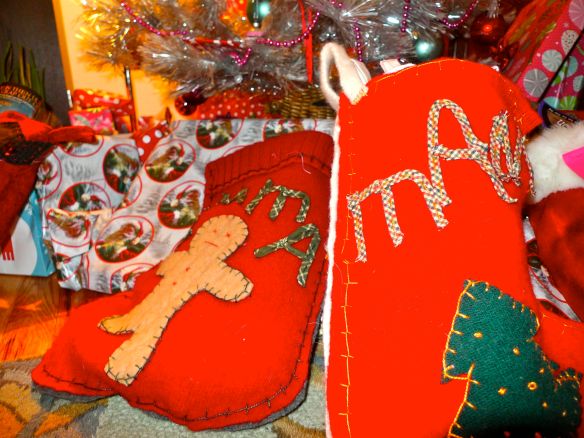 It was a splendid day. Gifts, ham, friends. Ham. Although there was a minor catastrophe when the oven element burned out, and we barely squeaked the biscuits out. I hope Santa brought you some magic that day too.

(P.S. About my previous post where I vowed to take it down a notch, well.  Hmm. I did make some gifts, but of course caved to the allure of having a party – THOUGH it was only an open house thing. I made a couple soups and people came to eat them. Tasty.)

But now!  It’s time to put all this away til next year. 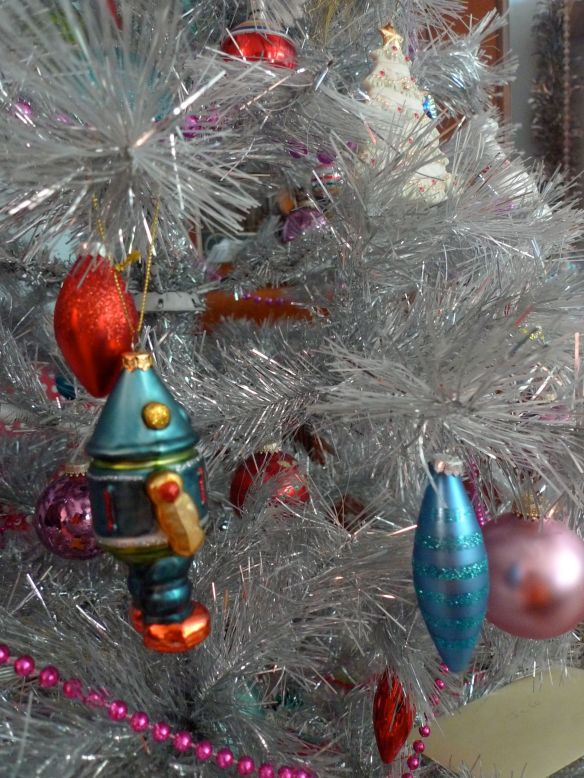 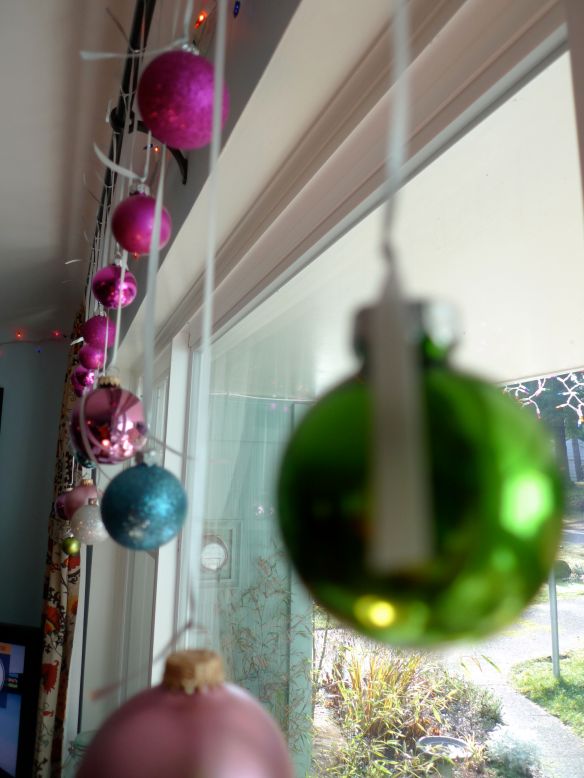 We have no New Years Eve plans because A) I am socialized out and B) I can barely stay up past 10 pm.  So we will eat well, including a coconut cream pie if the element gets fixed today (fingers crossed). And tomorrow the house goes back to non-Christmas. A fresh start.

I looked back at last year’s New Year post and was embarrassed to see that the big goals I had for the year were nowhere near completion: the garage and backyard and purging. To be fair, it was a jam-packed social year. Which is why we’re slowing it way down this year to focus on the homefront. For the first time in many years, I have not organized any camping trips for the summer. Not one.

Which should leave us plenty of time and energy to tackle that godforsaken pit of despair known technically as our garage. We are starting to save so that when it’s cleaned out, we can finish it and have another room for living. These kids aren’t getting any smaller.  Whether we’ll have enough money for that this year remains to be seen, but at least it will be ready.

The backyard is high on the list too. We did plant a feed trough with tomatoes last year, and this year plan to step up the edibles production. Luckily, our friend Farmer Fels and his lovely wife start many fabulous seedlings and share some with us. More conifers and less weeds, maybe some plushing of the spit of grass. So it looks less like a nuclear bomb cleared it and more like this.

I actually do love our little house, despite its one bathroom and lack of dishwasher. I have big plans for the kitchen if the money tree ever starts blooming and even the ceiling. But in the meantime I’ll have to settle for little fixes and lots of hard work. I’m excited to get started and have big hopes for 2012.

May the new year bring you health and prosperity and good times spent with those you love.  I’ll be busy getting the backyard ready for ribs and pie.