Hello, my poppets.  I promised baking in the mental upkeep department, so here you go. Today’s output: snickerdoodles.  Which I have to say I am fond of even more especially for their name.  It’s fun to say and I am easily amused.

I’ve tried a few recipes and not been won over.  Then I discovered in my very own cookbook library TWO recipes, both from Rosie’s Delicious and Decadent Dessert Book.  I have two of her books, and not had a bad thing baked from either of them.  Thoroughly recommend.  I must admit that when I went to start mixing today, I could not for the LIFE of me remember which of the two recipes I’d made before!  They are next to each in the book so I opted for the one with more stuff splattered on the page.  It does differ slightly from the other, more traditional recipe because that one calls for cream of tartar and this one uses baking powder.  I guess now I’ll have to try that next to make sure which is better.

It’s a pretty straight-forward recipe, handy for when the cookie urge strikes since odds are you probably already have what you need on hand.  Now, my brilliant flash of inspiration for these did not turn out as expected.  As you may recall, snickerdoodles are coated in cinnamon-sugary goodness. My grand plan was to use my good Penzey’s Vietnamese Cinnamon in place of the Costco kind.  Penzey’s sells all manner of spectacular spices and herbs, and just recently opened a STORE in downtown Seattle!  Used to be I had to mail order this stuff. 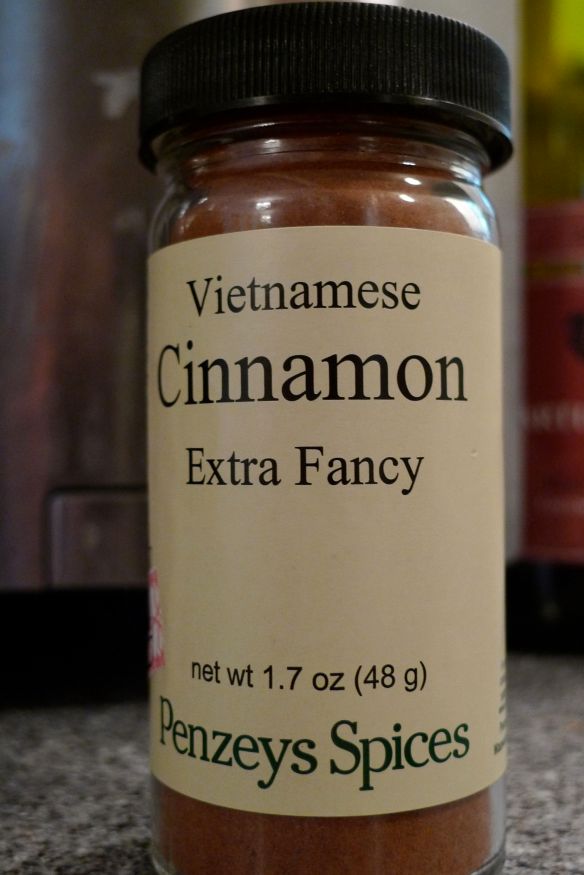 Anyhoo.  I mixed the good cinnamon in the sugar, rolled the cookies, baked and…well, I think it was just too intense.  It ended up being kinda burned.  Sad face.  Grand plan fail.  So  for the next batch, back to the garden variety cinnamon and sugar.  Probably coulda used a higher cinnamon to sugar ratio,  but not burned at least.  Guessing you can tell which is which. 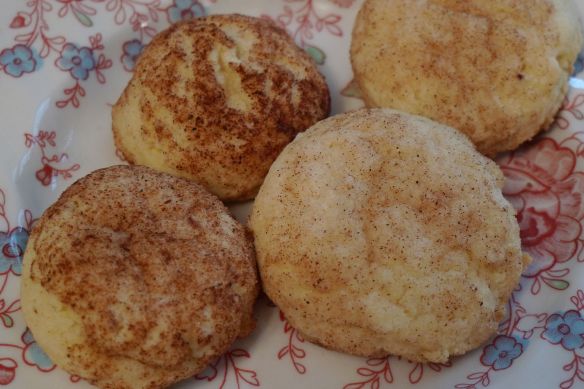 As for tinkering, I’d like to try a version where the cinnamon is mixed in and the balls are coated in sanding sugar.  I’d also like to make some bigger, flatter versions for filling with lemon or blackberry ice cream.  But these will do just fine for now.

From Rosie’s Delicious and Decadent Dessert Book, where she credits Michael Baker from Baker’s Best with the recipe

(I’ve condensed the instructions, assuming you people have made a cookie or two, because I’m lazy and it’s not rocket science)

Preheat the oven to 375.  Line baking sheets with parchment or grease baking sheets.  Sift the flour, baking powder and salt and set aside.

Cream butter, 1 1/2 cups sugar and vanilla til light and fluffy, stopping to scrape bowl.  Add eggs and beat til blended.

Measure rounded scoops of dough (I used a small scoop), roll in cinnamon sugar.  (I flattened mine slightly).  Bake til risen and slightly cracked.  Recipe says 16 -18 minutes, which was WAY too long for mine.  9-10 was just fine.

Eat.  Enjoy.  Maybe with an oatmeal cookie shot.  Or milk.

One thought on “snickerdoodle dandy”