Against the wishes of my entire family, who would prefer to spend the first real day of summer glued to a screen of some sort, I dragged them to Green Lake, Jack included.  And my new camera, though I must confess to still needing to practice with the manual.

At some point I switched the aspect ratio from 16:9 to 4:3, which is why that second one is a different size.  At least, that’s my story and I’m sticking to it.

Same with these leaves and the daisy.  I like the leaves for their texture and shadow.  We were headed toward the off leash area, where Jack proceeded to make sure all the “swimming holes” were empty.  He does not do this with his dish at home, but he will do it at the park as long as some poor sucker will keep filling it up.

I tried to get one of these using “shutter priority” button to see if the water would look different.  Too bad I can’t remember which one – though if I had to guess I’d say it was the second one.  Emma and Dean made a friend in Annie – she growled every time a dog came near! 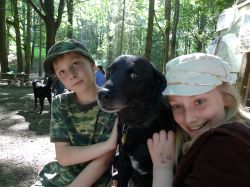 The family is now of course firmly ensconced in front of their screen of choice, but they did all admit it was a fun outing.  Score one for Mom!

P.S. For you Roanoke-watchers,  in some surprise news, we learned today the buyers have backed out.  So far, calls to the landlord and their broker have not  been returned so our status is STILL unknown.  Stay tuned.