Been a rollercoaster over here lately and i have been remiss in posting.  Apologies.  I had expected the tide to turn in our favor, if that damn horoscope was to be believed, but alas that is not the case.  At least, it seems that way now – in a month or so, we may be saying it DID turn in our favor, we just didn’t know it.

We found out Friday that the Roanoke has until July 31st in our current location.  Bittersweet news to get on the eve of our 15th Anniversary party.  We seriously wanted to just pull the plug on the party – definitely didn’t feel like celebrating – but folks had come from far and wide and plans had been made.  The show must go on.

SO glad we did.  JunkBelly rocked the house, and no one seemed to notice how small  our tiny little back room was.  They were up close and personal with the band. 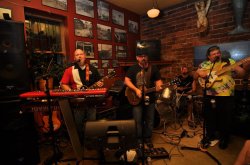 The Keeper then took the stage for some mind-melting metal…

Any sadness we’d been feeling was tempered by so many people telling how pissed and shocked they were to hear the news.  Lots of hugs and good wishes made it a night of celebration after all.

Yeah, it sucks to go out this way.  But with so many people behind us, we’re fired up to find a new space and make the Roanoke even greater.  This place means something to us and a lot of other people, and we can’t just throw that away.  So thanks to those of you who came and showed us the love – it was just what the doctor ordered.  Onward and upward.

Oh, and if you hear of a bar that needs a tenant, let us know.

One thought on “when the going gets tough”