What I am about to write may possibly offend some people. I am OK with that.

When I was in high school, I went to Camp River Ranch for a month two summers in a row, training to be a counselor.  This is a Girl Scout camp, and those months were two of the greatest of my life.  One of my fellow CIT’s came to me with a confession and a book.  The confession – she was gay; the book – Ruby Fruit Jungle.  I remember feeling honored to be the one she told, without knowing why.   I never read the book but it must have been in my stuff.  When I got home, my mother mentioned something to me about the book, something along the lines of “was someone making you do something you don’t want to do”.  I said no, it was a friend’s book and she never brought it up again.  Turns out quite a few of my fellows CIT’s were gay, as well as the counselors I would eventually work with.

I don’t know why it never occurred to me that there should be something wrong with someone being gay. It was certainly never mentioned one way or another at home. But I know now that to some people, there IS something wrong with it.  Even though it has NOTHING to do with them.

In college, I met some of my best friends. Turns out that the boys love other boys, and the girls have been together longer than any couple I know – gay or straight.  They are gay, and some of the best people on this planet. I am so lucky to know them and call them my friends. Would I be friends with them if they weren’t gay? Maybe – but they wouldn’t be the same person, would they. It’s part of who they are – that struggle, more for some than others.

Which is why it makes me so damn mad when a new bar opens up that happens to cater to a gay clientele and gets turned down by a printing company based on morals.  When people argue that marriage is only between a man and a woman.  Isn’t it really about being with the person you love?  And how does two men or two women being married affect any other STRAIGHT person’s marriage?  I will never understand that argument.

It is why the bar sponsors a gay softball team.  Because the people I know are loyal and loving, generous and hilarious. They are just like you and me, but the boys like boys and the girls like girls.  Big deal.

They are part of my family.  I can’t imagine my life without them. And those that dismiss them, that judge them without knowing them, they don’t know what they are missing.

Here’s to pride. And my gays. 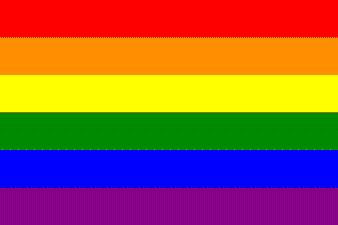