At lunch yesterday- a very grim, gray and soggy day- I killed some time in the Barnes and Noble crafty magazine section.  Normally I’d pick up a sewing magazine since that’s my current drug of choice, but it occurred to me that like many things lately (insert: recipes, patterns, plants, house projects) , I’ve been collecting ideas and not DOING.  So I grabbed a knitting magazine.

I learned to knit probably 15 years ago at a yarn store downtown that no longer exists.  They offered lunch time classes and I actually did make a sweater in that class. I have no idea where it is.  Since then, I made a Charlie Brown sweater for The Geek which is *ahem* a tad over-sized but I am afraid to shrink it for fear of irreversible damage, an Icelandic-style sweater (no seams!), a baby sweater or two, a vest, and a few other odds and ends, but my favorites are the hats I made for the bar staff a few Christmases ago.  Based on The Geek’s hat which says “geek” (duh), each one was titled appropriately.  Kat = “gato”, John = “juan”, Dwight = “coach” – wish I could remember them all.  That was some serious crunch time knitting.

I let knitting fall by the wayside a while back.  For one thing, to make a sweater, it takes a LONG time – and I’m a pretty fast knitter.  I’m more an instant gratification gal. The biggest problem is the pain I get in my hands from too much knitting – it starts to hurt too much so that big sweater project never gets finished. Plus, while tempting to buy all the new delicious yarn, if you don’t have a pattern in mind, you don’t know how much to buy, and yarn takes up more storage space than fabric, which you CAN buy and store for future unknown projects.

Anyhoo, the magazines I bought yesterday inspired me to dig out my unfinished projects and random knitting bits.  I know one is at least 5 years old (but still cool!  basically a sweater with just sleeves and a turtleneck!), a purse that will be felted when finished, and a  couple scarves. Luckily I also found a shit-ton of circular needles (expensive buggers) BUT not one single complete set of double-pointed needles, which is a pisser.  I’m thinking I will look on Ebay to fill in the gaps.

The irony in all this is that for the past year and a half, some college pals and I have met weekly at the Roanoke for Stitch.  Before this current group, I would meet there on and off to teach people who wanted to learn, but each time the group would fade away.  This one has stuck and it’s the best therapy ever.  We don’t always knit, but now that the nip is in the air, the yarn is out and needles clicking.  I usually have a scarf I make a piddling attempt at, but my heart hasn’t been in it.  I watch their progress and envy their new knitting toys from afar.

Tonight, I am back in the game.  I will hit the new yarn store downtown at lunch and hopefully discover all the new knitting gadgets that have been invented in my absence.  The interweb is chock-a-block with knitting blogs and free patterns now – one more thing to collect.  I will finish the pre-NYC turtleneck scarf.  And this year, maybe, just maybe, will be the year of the Jayne hat.

Stitch at the Roanoke: Tuesday nights at 6.  Newbies welcome! 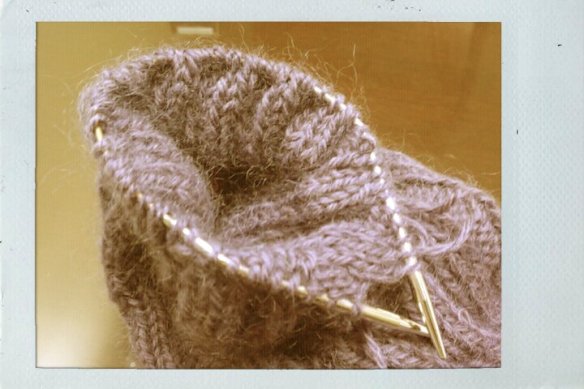 2 thoughts on “back in the knit of it”